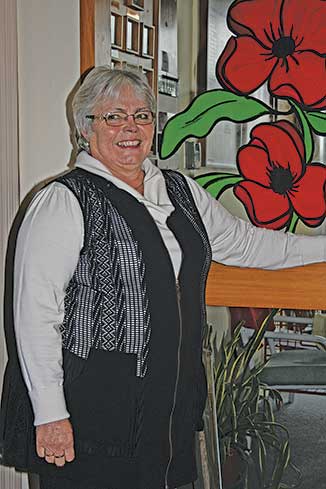 After 27 years at what was originally a part time job which became a full time plus, Patricia Bloxham is retiring from her job at Otaki’s RSA.

Over the years, Pat has worked through many changes within the club in her secretary-manager’s position. When she started in 1988, the RSA was run as two parts. The RSA looked after the buildings and assets and the RSA Club was responsible for the bar and social activities. There were no computers so everything was written by hand or typed, beer came in tanks, now it’s in kegs and there was only one pokie – a 20 cent slot machine whereas today there are 18 machines. The computer age began in 1993.

“I started on three hours a day, but it wasn’t long before it increased to six hours plus Saturday morning,” she said. “The president (of the time) was my boss – I’ve had six different bosses over that time!”

As the alcohol and gaming laws changed and licensee’s had to be more accountable, Pat’s hours at the RSA increased. By 1997 the management and social sides of the club realised there was a lot of duplication of finances and general expenses and the members agreed to bring both sections together.

Waikanae was a branch of this association until it closed in 2004, Otaki has looked after Waikanae ever since.

“When I came, workmen were just finishing the extension with the billiards hall and the new restaurant,” said Pat. “The changes were not liked – then the office was where the TAB is now and the library was where the office is.”

Like many organisations, the Otaki RSA has had its struggles, so income from the gaming machines is used for the club’s assets and people.

“We still struggle, we’ve tightened up a lot of expenditure and we’re working to a budget and paying our accounts on time. There was a time when we had great difficulty (to cover expenses).”

In earlier times the restaurant was very busy but not so now with the drink-drive laws; the operation of the restaurant had been contracted out for several years.

The Women’s Division was a major part of the Otaki RSA, they catered for members’ funerals and for social events, but with declining numbers they disbanded in 2013.

Pat’s official farewell on June 21, saw a crowd of family and members gathered to ‘sing their praises” to Pat for the part she has played throughout her time there.

The Snooker adjunct had plenty to thank her for – particularly for her early morning turnout for tournaments, sometime at 6am! She helped secure sponsorship for tournaments and organised the kitchen. The girls’ housie group appreciated her support too; they’re still going strong with regular playing days.

President, Pat Kenny spoke of the need for a new roof for the building; they got the roofing fund going and now have enough to start working on the new roof.

Vice president, John Underwood, spoke of Pat’s work with the Ngati Raukawa people, particularly her care of the old soldiers; those here today and those who have passed away. “Pat’s had a lot to do with our community on Anzac Day, with the housie days, funerals and events here. Thank you for your 27 years here and in the community.”

Many spoke of the part her family have put into the club.

“There are some here today who were here when I first started. Thank you for being a big part of my life here,” Pat said. “You know my family – husband Roger – he’s here nearly as much as I am, son Kieran and daughter Amanda have helped a many functions and on Anzac Day over the years. When they were at Otaki School they used to come after school – there would be a plate of food waiting for them from the caterers. Now the grandchildren, Courtney, Sophie, Mason and Cruz all had a big part of life here.”

And there were many memories – there were no smoking restrictions “you couldn’t see the back of the billiard hall for smoke!” When she started regulations meant they could only have100 associate members – now there are 200 and a waiting list! Then Christmas 1989 – a fire began in the store room off the dining room and the committee of the day didn’t like paying insurance “we have a concrete building” they said, but the smoke damage throughout was horrific!

Pat first came out from England in 1971, sponsored by the New Zealand Motor Corporation, intending to stay just two years. She returned to England but only stayed three months before returning. She met Roger and they settled in Lyall Bay, where they came to know fellow English “escapees” Brian and Chrissy Anderson. After the Andersons moved to Otaki they used to visit for weekends with their two young children, Kieran and Amanda.

“Kieran was a very active boy and we didn’t have much garden for him to ride his bike. One day Brian rang to say there’s a house up here you may like, so we came up to see and bought it.” Pat said.

“Kieran went to Otaki School and Amanda to the kindergarten. After we had settled in I looked around for a part time job, saw the job advertised at the RSA advert and I’ve been here ever since.”

And for the future, she hopes to enjoy time to work in the garden and on the house; she might look at outdoor bowls a bit more.

“We’re looking at buying a caravan and doing a big trip round New Zealand , neither of us has been to the bottom of the South Island, and possibly Australia.”

Pat was presented with a flowers and a bag of goodies, including a variety of vouchers.

“I know I’m going to miss you, but we’ll be around, we’re not leaving Otaki.”