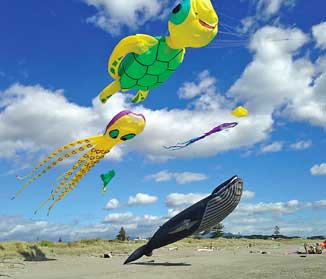 A record number of national and international kite flyers will be at this year’s Ōtaki Kite Festival on 28 February/1 March.

This is the third kite festival held at Ōtaki Beach where huge show kites, stunt kites and fighting kites will be shown off.
World-renowned kite maker Peter Lynn from Ashburton will be at the event, along with Australian kite artists Tony Rice and Robert Brasington who are both well known in the kite-flying community for their innovative designs and artistry.

The Rokkaku business house kite fighting challenge is back again and this year, the 12 entrants will have more rounds of competition to show off their strategy and technique. The idea is that each competitor manoeuvres his or her kite to bring down another competitor’s kite, without going down as well.

People can also bring their own kites to fly and there will be spot prizes for homemade kites on the Saturday afternoon from 12–4pm.

In addition, there will be plenty of stalls on the beach to browse through.

“We’re being told by the flyers that the Ōtaki Kite Festival is the one to go to,” festival organiser Barbara Franks says. “We have a fabulous beach at •taki with plenty of room to display the kites. There’s also plenty of parking, so people can come with their deck chairs to enjoy the kites flying overhead. Or they can bring their own kite to fly. It’s fun and it’s free.”

At 4pm on both days, the acrobatics and street theatre group Fuse Circus will perform in the car park by the surf lifesaving club.

Council provides the main source of funding for the kite festival. The support has helped underpin the festival’s status as one of

Kāpiti’s key events, attracting a large number of visitors from throughout the region and beyond.