This Monday (20th July) the 72nd Ōtaki Scholar, Benjamin Osugo, arrived in Ōtaki.   A whakatau for Benjamin and three new International Students, Simon Pauka, Nicolas Wackermann and Christopher Wenserski, was held at College.  Benjamin then spent the afternoon looking around the College and relaxing and recovering from his lengthy journey.

On Tuesday morning Benjamin was formally welcomed into the Ōtaki Community at a powhiri held at Raukawa Marae.  After the welcome, attended by local dignitaries and College representatives, André Baker took Benjamin, together with Ōtaki College Head Girl, Clare McInerney-Heather, Head Boy, Tevita Kata and Associate Heads of School on a tour of local sites.  On Tuesday evening the Scholar was hosted at the Ōtaki RSA.  Tevita and Benjamin were scheduled to spend Wednesday night on Kapiti Island, courtesy of Kapiti Island Nature Tours, but unfortunately weather conditions made this impossible.  Instead, Benjamin experienced local fauna and flora at Nga Manu Nature Reserve and walked the Arcus Loop at Ōtaki Forks.

Benjamin is the Captain (Head Boy) of Robert Gordon’s College in Scotland.  While he grew up in Aberdeen, Benjamin has Danish and Nigerian parents and has already travelled widely.  He is studying Maths, Physics and Drama at Robert Gordon’s College and intends to study Physics at university.  His Head of College has described him as ‘an effective leader who is popular with his peers and commands the respect of staff.’  His relaxed and friendly approach was much appreciated by Ōtaki College students and staff.

On Thursday morning Benjamin continued on his journey, catching the ferry across Cook Strait to visit Marlborough Boys’ College.  Ōtaki College and Community are proud to again be the first stop on the Scholar’s tour of New Zealand.

History of the Ōtaki Scholar 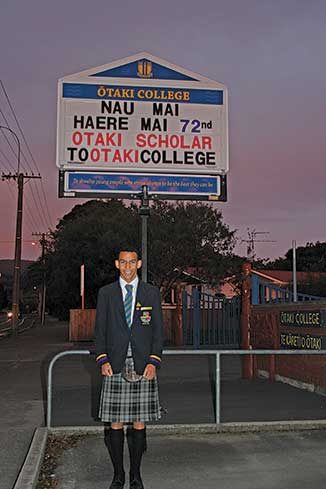 The Ōtaki Shield — a Scottish-based scholarship awarded to the head boy of Robert Gordons College in Aberdeen — rewards an outstanding pupil at the end of their final year with a seven-week trip to travel through New Zealand visiting schools and sightseeing. During his time here, he is hosted by families in the North and South islands.  He attends a number of colleges and acts as an ambassador as well as addressing students on the history behind the scholarship.

The New Zealand Shipping Company merchant ship SS Ōtaki was critically damaged in March 1917 by a German raider and Capt Smith ordered the ship’s evacuation before he went down with the vessel.

Capt Archibald Bisset Smith was awarded the Victoria Cross for bravery and devotion to duty and in 1937 his family presented the Ōtaki Shield to the college, to be given annually to the school’s head boy.

The New Zealand Shipping Company traditionally offered a free passage to the winner but the New Zealand Government now assists with air fares and some accommodation.

To celebrate the long history of the Ōtaki Scholar and the establishment in 2013 of the Sander Scholar (a reciprocal scholarship providing an Ōtaki College student with the opportunity to travel to Scotland for three weeks), a series of paintings depicting the history of the Ōtaki Scholar and the links between Ōtaki College, Robert Gordon’s College and the Sander Tie Company has been commenced.  These will be unveiled later in 2015.  The paintings have been overseen by local artist, Wallace Trickett, who has devoted a huge amount of his time ensuring that the murals are not only fine artworks but that all details are historically correct and accurately depicted.  Our thanks to Wallace and the students who have worked so hard on this project.

The Ōtaki College bike project is starting. This is a partnership between Otaki College, the MenzShed and Energise Ōtaki.

Troy Harris, Xavier Wickliffe and Rereheu Grennell are working with Tony Evans and Valdis Plato from the Menz Shed to ‘do up’ some bikes for the community to use.

We have kindly been donated some bikes and our aim is for each student to refurbish up to two bikes each  by the end of the year.

Energise Ōtaki has obtained some funding from the World Wildlife Fund to help us start off, by getting some tools for the work on the bikes. Colin, our caretaker, has worked hard to clear one of his sheds for us to use as our ‘bike shed’. Mr Georgetti is helping manage the project.

We will keep you updated on our progress.

The workshop was for students interested in filmmaking for change, as well as teachers and youth workers who want to engage with The Outlook for Someday as a vehicle for sustainability film-making.

All workshop participants made short films and screened them at the end of the day.

Each student also came away with a story idea in development — one that is meaningful to them and which they could then turn into a film as an entry to The Someday Challenge.

The workshop was interesting as it combined the skills of filmmaking with the development of ideas around sustainability and how film can help to create a call to action. Following on from the recent success in the year 11 class, the challenge is to do well in the Outlook For Someday too. Here’s hoping! 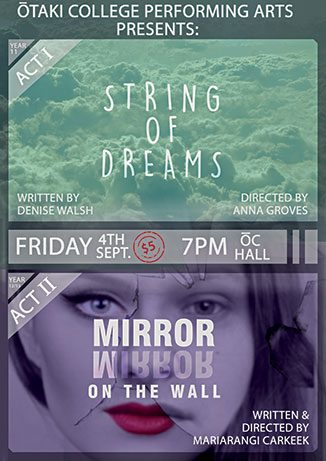 It is all go in the Drama Department!

Students are working hard to complete their production, learning lines and developing their characters. The theme will be 1980’s this year, so you can look forward to big hairstyles, pink lycra and funky music. The costumes will be provided by Ōtaki Players — we wish to thank them for their ongoing support to make our production MAGIC!

Come along to support the students on Friday 4th September in the Ōtaki College Hall, 7pm (finishes approx 8.30).

“Our three days at the Ontrack Sports Leadership Academy were well spent with lots of activities including Speedball, 4 Way Volleyball, Frisbee and “The Ultimate Game”. During the course we learnt about Goal Setting, Sports Fundamentals, Speed and Agility, Spatial awareness, Inner Fitness and more. These are things that are not only going to help us grow as athletes, but will help our mental health too.

We were taught that your character means a lot when it comes to being an athlete. It shows how good a person you are in and out of sport. Your reputation is just what people think/see of you and not how you truly are as a person, it’s your character that keeps you balanced. Learning about this really made us more confident, not caring about our reputation because we know what our true character is.

Our time spent at the Ontrack Sports Academy has helped us set goals for our future, it’s taught us to push ourselves, believe in ourselves, and know just because we’re from a small town that doesn’t mean we can’t do great things. It was an inspiring experience, while also being fun. We learnt leadership qualities, through the games and programmes we had, and also by the great role models we had throughout the whole course.”

Are you thinking of sending your child to Ōtaki College?

You will be sent an email each Thursday with the latest ŌC news and updates and, once a month, our School Newsletter.

It’s a great way to gain a feeling for what we’re all about.

Parents who would like talk with the Ōtaki Principal and Deans about enrolment for 2016 are invited to attend one of the following meetings held in the staffrooms of the named school:

If you are unable to attend one of these events, please do not hesitate to contact Principal, Andy Fraser,  to arrange a tour of the College.