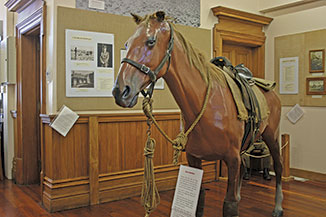 Otaki Remembers World War I continues, but with changes from Thursday 5 March. The introductory material, Roll of Honour and popular horse will remain, but much of the exhibition will then feature new displays on Gallipoli.

On 25 April it will be 100 years since Anzac troops landed at what was later to be named Anzac Cove. The troops included men from our district, and by the time the soldiers were withdrawn at the end of that year, twelve of our local men had died. The exhibition will also include the Armistice, Otaki after the war including the influenza epidemic, and stories about several soldiers who settled in Otaki after the war and made a contribution to the town.