Mayatiita Southerwood bases his life and work on spiritual, holistic philosophies. It’s reflected in the name of his organic microgreen business in Te Horo, ‘Prana Greens’ (‘Prana’ means life, from the Sanskrit ‘pra,’ to fill), which is all about living food.

Although involved in organic horticulture for more than 20 years (he has a B. Hort degree from Massey), it was “just random really,mucking around with seeds” that led to the establishment of the business at Common Property in Hautere Cross Road in 2003. He originally produced wheat grass, later sprouts, for the booming Wellington juice bar market (that side of the business was sold in 2008).

Quickly outgrowing his Common Property base, he moved to a commercial greenhouse in Settlement Road, part of Stanmore Farm “around ten years ago,” but produce is cut and washed at CoralTree Organic Products in Riverbank Road, Otaki.

“I have two part-time staff as well as my own full-on input. Plants don’t have rest days or public holidays, so it’s pretty much all go – all the time.” 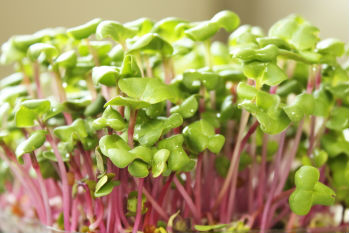 Essentially, microgreens are lettuces, vegetables and herbs, that are harvested when young. Mayatiita grows around 12 to15 varieties , including red cabbage, dill, coriander, mustard, radish, peas, pak choi, kale, rocket, beetroot and red and green basil. They are grown from regular seeds in “everyday, ordinary potting mix.” If left to continue growing they would turn into the mature vegetables and herbs we are familiar with. The greens are left to grow until their first leaves have fully matured, then harvested as tiny, vibrant tasting salad greens. Harvest time varies according to the variety of seed, but generally the greens are eaten within 8-14 days from planting.

While they may be petite, the tender plants (only the stem and baby leaves are eaten) have an intense flavour, some quite buttery (and very yummy), others, like the wee rocket leaves, taste peppery but without the harsh bitterness the adult plant can acquire. With their different colours and texture the microgreens also have a definite aesthetic appeal, and Mayatiita says they are very popular with children, even preschoolers (that’s got to be a plus).

Because ‘Prana Greens’ are still living (until cut for use) they contain higher levels of concentrated compounds than those in mature plants, and are known to have high health support value in terms of health promoting or disease preventing properties (in addition to their normal nutritional values).

“The chlorophyll in living greens is readily absorbed, maintaining blood health, and the magnesium gained from eating the chlorophyll helps to maintain emotional health,” says Mayatiita.

These little powerhouses of health, energy and taste can be used in salads, pasta, sandwiches, in stir fries and soup, or eaten on their own for a healthy nibble during the day. Which just goes to prove – good things come in little packages.