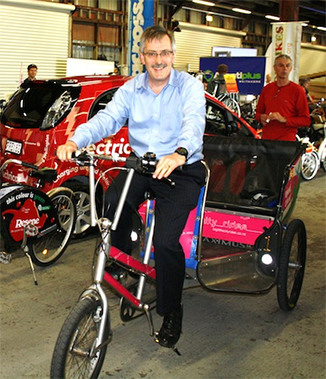 Rod Oram, top business journalist and advocate for a grass-roots “energy revolution” in New Zealand will address two meetings in Ōtaki in October.

Energise Ōtaki (EŌ) has organised the meetings as a public launch of its vision of Ōtaki as a vibrant, energy efficient and energy producing community. EŌ is a group of local people working towards this vision through a range of ideas and projects, several of them involving Ōtaki College. Kāpiti Coast District Council, Transition Town Ōtaki, the Ōtaki Mail and the NZ Clean Technologies Association also support EŌ.

Rod Oram is a respected commentator and broadcaster on topics critical to New Zealand business, energy, agriculture and the environment. Originally from the UK where he was a writer and editor at The Financial Times, he’s now an independent journalist, broadcaster and public speaker. He writes a column for the Sunday Star-Times and broadcasts on Tuesday mornings on Radio NZ’s Nine to Noon programme.

Rod’s awards and scholarships are numerous. He’s author of Reinventing Paradise, (2007), based on his articles and interviews about New Zealand and the challenges ahead of climate change, oil shocks, political instability and the need to earn a better, more sustainable living in the world economy.

His visit here comes immediately after a trip to China, the UK and US to talk to business and energy leaders about the opportunities in moving to low energy and energy efficient economies.

The public is invited to both meetings, the first at Ōtaki College, 7pm on October 27, where Rod Oram will present his ideas alongside senior students who’ll be show-casing their own energy-efficient projects. He himself has renovated his 1944 house to change from a household using 29,000 kWh per year to one using just 5,500 kWh per year.  He has converted his 10 year old Prius car to a plug-in hybrid and exports any excess energy from his solar panels to Contact Energy. Rod is also a cycling enthusiast.

The second meeting is a business breakfast at the RSA, 7.30am on October 28. Local business people will be critical players in the move to a low energy economy and will hear at this meeting how energy efficiency can save money and benefit their enterprises, at the same time supporting the community and the environment. 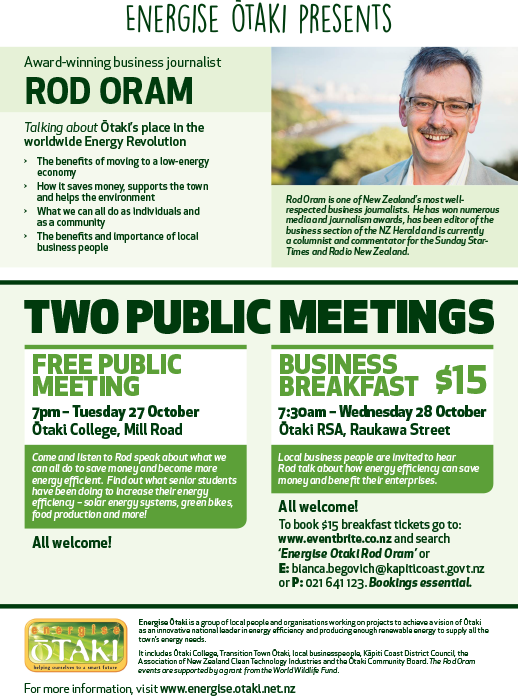