The World Wildlife Fund for Nature began in 1961, the brainchild of Sir Julius Huxley. It works on issues regarding the conservation, research and restoration of the environment. The world’s largest independent conservation organisation with over 5 million supporters worldwide, the group’s mission is “to stop the degradation of the planet’s natural environment and to build a future in which humans live in harmony with nature.” It is widely regarded as the most important non-governmental force in conservation.

The recognition of Energise Ōtaki by this award is a tremendous endorsement of a community collective that tackles the big issue of energy costs & climate change for the wellbeing of people and biodiversity. WWF judge Devon McLean said: “Energise Ōtaki is a truly innovative project based on a community seeing their town as a system and how people can work together to reduce their own, and the town’s, environmental footprint. It is inspiring to see such a range of projects designed to reduce greenhouse gas emissions, supply clean and cheap energy to the townspeople, create jobs and educate kids.”

The $25,000 award will allow Energise Ōtaki to explore innovative solutions including alternative energies, energy conservation, a census to measure ‘Energy Poverty’ in the town and the establishment of an Energy Investment trust to stimulate uptake of renewable energy solutions.

Spokesperson Bryan Sharpe said: “We’re thrilled to receive WWF’s endorsement of our initiatives. Working with Ōtaki College and the Ōtaki Cleantech centre, we have seen students implement exciting concepts that have already shown how a school can become a conservation site of the future. This grant will allow us to explore more innovative ways of energy minimisation for Otaki.”

What is Energise Ōtaki?

Energise Ōtaki is an umbrella concept focused on Ōtaki becoming the first New Zealand town to be a net exporter of clean energy. The Energise Ōtaki reference group consists of interested individuals, community groups, businesses and organisations interested in advancing projects and supporting smart energy conservation and clean energy generation ideas in Ōtaki, with this ultimate goal in mind. The Kapiti Coast District Council and the Ōtaki Community Board have continued to provide support. There is a strong focus on education and job creation – and on having fun doing it. Anyone is welcome to attend these meetings – and to bring their ideas along.

The Energise Ōtaki vision is huge, involving action across many areas. It is about reducing electricity consumption, reducing reliance on fossil fuels, giving people choices about what energy they consume and how they purchase it, how it is generated and how they can reduce their overall energy use. It involves local clean energy generation. Following this path, Ōtaki can reduce its contribution to long-term human-induced climate change.

Energise Ōtaki is advanced through community involvement in projects, large and small. The idea is not owned by any one group but relies on individuals, businesses and organisations becoming involved. 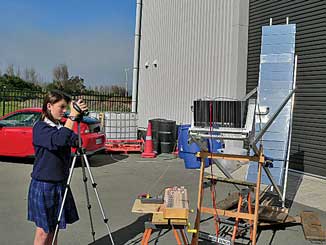 Dawn Hirschberg, science teacher at Ōtaki College believes it has been a great success. ‘The students have learnt a huge amount about this new technology. Having one of the clean technology businesses work with them has been wonderful’. .

Work has started on installing the first 10.4KW stage of solar panels. Brian Sharpe of Solarzone is providing the monitoring and readout system which can be used for teaching, free to the College. The system will be owned by the XOtaki Foundation Trust who will use the income from electricity generated to develop scholarships and associated projects for students.

The website, built by voluntary labour, is now up and running. It provides an overview of the vision and projects, events and direction. It can be found at www.energise.otaki.net.nz. For more information, you can contact Energise Ōtaki via this website.

The Ōtaki Energy Cooperative is being established to provide a mechanism for people in the Ōtaki community to install clean energy systems, such as solar panels, on their homes and businesses. It can be hard for people to find the up-front cash to invest in a system and the co-op is being established to make this easier. The constitution has been finalised and the co-op will be launched in early 2015.

In broad terms people who become co-op members would enter into agreements with the co-op to install a PV system on their house and pay an energy price to the co-op which would be lower than that which they would pay to a power company. Over time they would become the owner of the system. Co-op revenue would be used to invest in further systems in Ōtaki.

This is a model used by many communities in Europe. It’s a great approach which protects people from ever rising power prices and provides the Energise Ōtaki concept with some additional teeth to deliver the long term vision for Ōtaki. 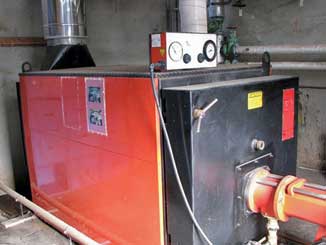 This is the Ōtaki College gas-fired boiler which provides heating in the winter months. The boiler has a lot of life left in it but the cost of gas still exists for the school and it is also using non-renewable fuels.

Under the Energise Otaki umbrella, the option of wood gasification which takes wood chip or pellets and converts this into a gas which is inserted as a supplement into the gas supply is being explored. This project will continue in 2015, with assistance from the WWF NZ award funding to develop a local supply chain for the wood. If you have a boiler system and want to join in looking at this alternative let us know.

This is a central government initiative which provides for insulating houses (ceilings and underfloor) owned or occupied by people who have a Community Services Card (occupied by children under 17 years or someone over 65 years).

Transition Towns in partnership with KCDC have taken this up as an Energise Ōtaki project – with a goal of getting everyone in Ōtaki who is eligible to get this funding.

If you are eligible or know someone who is – please get in touch via the Energise Ōtaki website.

Kapiti Coast District Council has started its roll out of energy efficient LED street lights, installing them as the old lights need replacement. Pictured here are the new LED lights on Miro Street.

The Council continues to contribute to the Energise Ōtaki vision, energy efficiency and reduction of green-house gas emissions, along with the Memorial Hall solar panels and the large solar panel array at the Ōtaki Swimming Pool.

Ōtaki man Hamish Scott’s achievements in England with his revolutionary Starpath ‘glow in the dark’ footpath has created world-wide interest. Based in London, Hamish’s company Pro-Teq have announced the sale of their first franchise to South Korea.

Franchising is the best way of keeping control of a technology concept, and Hamish’s company Pro-Teq will build the equipment to apply this revolutionary coating, which had its genesis many years ago when Hamish worked at his father’s Ōtaki company, Matta Products.

Things are moving fast. Enquiries have flooded in from around the world, from Panama, Chile, Brazil, Japan and Kuwait. Hamish is currently in Poland to discuss a 1km Starpath running track. He expect to have six or seven countries signed up by Christmas.

Meanwhile Nissan have decided that Starpath is the way to promote their new electric car. They’ve supplied Hamish with a white car, which he’s coating in Starpath ‘magic paint’, so that it will glow blue at night!

A New Zealand Starpath franchise agreement will be signed in the New Year. Hamish Scott has undertaken that the first Kiwi Starpath will definitely be in Ōtaki, implemented in conjunction with Energise Ōtaki. Watch this space!

Some 2015 Energise Ōtaki projects supported by the WWF Grant

It is estimated that about one-third of food produced is wasted – from a combination of supermarkets wanting us to use the ‘best before’ idea, throw food out and buy more, or simply forgetting what we have in the fridge or cupboard until it gets really nasty! An awful lot of perfectly safe food could be used and a whole lot of fossil fuel use in the growing and transportation of food could be avoided. This is going to be a focus in 2015. If you are good cook and know how to use food well, a gardener, or just want to save money, get in touch.

Energise Ōtaki and interested groups are developing a ‘Green Bike’ project in partnership with Ōtaki College. The idea is for students to re-furbish old bikes and make them available for use around the town. Sick of walking from Main Street to Ōtaki Beach, or to the Plateau? – you will be able to pick up a green bike and use it and then leave it for others to use. A second stage will be the students learning how to build simple electric bikes –working with clean tech businesses. Interested? Let us know.

(a focus on wind)

This is a picture from South Australia where people can put small wind turbines on their houses as of right.

This project will continue to work with Ōtaki College students (in this case technology students) to build a small scale turbine in partnership with a clean technology business. The idea is that the students can make these available for families in the town for a small cost, to allow new students to keep building systems each year . Excellent fun and good practice for College job seekers.

Wood is considered a clean fuel which when used with new technologies avoids harmful greenhouse gas emissions. There is real potential here in Ōtaki and it will be important to try new technologies in partnership with clean technology businesses and local supplies (and may be local jobs) even if we start small. Supplying local fuel for a wood gasification system at the College is the first challenge.

The WWF (NZ) award will help us explore this area.

Project 5: Surveying what Ōtaki People are doing Around Energy

We already know from a KCDC-commissioned study how much energy Ōtaki consumes(see pie chart). What we would like to know more about is how many homes and businesses already have clean energy generation (e.g. solar power) and how many consciously manage their energy use: who walks, who uses bikes to get around, who uses the train, etc. How many homes are already insulated? We want to know if some families are going cold in the winter because they can’t afford the power bills.

Energise Ōtaki will conduct the survey in winter when people are more conscious of their energy use. If you are interested in this, can help with survey design, or love the numbers side of things, please get in touch.