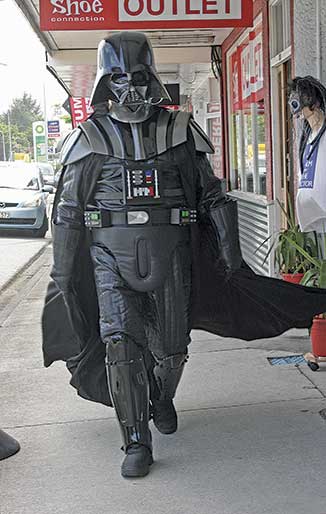 Arch-enemy, Darth Vader, from the Star Wars film saga, made a surprise visit to Otaki on Wellington Anniversary Day. The Otaki Mail spied him at Planet Retro and SciFi shop on the highway, where he had paused on his mission, involvement in children’s causes and collecting donations.

The man inside the uniform, who preferred to stay anonymous, is a Star Wars “enthusiast” and an independent collector of Star Wars memorabilia. He’s also a member of the 51st Legion International Group, a worldwide organisation. Previously he attended a Waitohu School fancy dress evening in his ATAT driver’s uniform!

“It’s really just a promotion for the sci-fi store,” Plant Retro owner, Di Lyall said. “As far as the store goes, Star Wars has been an enduring love affair for many. There’s a lot of passion among locals and people from out of town, particularly fans.”
Fans have an increasing interest in the thrills and adventures of the earlier films, with a new film due for release at the end of 2015.