Shards of charred timber, bent and blackened corrugated iron and a solitary brick chimney remain. Those warm-yellow bricks conjure up memories of fireside dinners, great food and good friends, of a restaurant bustling with life, buzzing with happy and contented diners.

But the fiery, apocalyptic-like drama that illuminated State Highway One earlier this month, that blistered and scorched the timbered side of adjoining gift shop, The Black Bach, completely destroyed the century-old, Coca-Cola red building, home to Te Horo’s iconic landmark, The Red House Café.

Much of Te Horo’s early settlement and agricultural history is linked to James Gear, butcher and farmer, and a significant figure in the business development of New Zealand. It was his death in 1911, and the subsequent auction and division of his estate that enabled small blocks of land to become available near Te Horo’s main road. John Faith, an immigrant from Ireland who arrived in New Zealand around 1889, acquired one of these roadside plots, and in 1912 built the growing Te Horo settlement a general store, ‘Faith’s Supply Store.’

Two years later the post office (later to become The Black Bach) was moved next door from across the main road. In 1917 John Faith sold his store to the Te Horo Dairy Cooperative Company, and the building became known as the Te Horo Co-op Supply Store. It continued operating until the late 1920s when, after making a loss, it was sold into private ownership (Harry Wise).

From the 1950s the building took on new life as a general store when Bernie Doyle, a Wellington grocer, bought the property from the Scarf family in 1952. Peter, his son, remembers the family business sold pretty much everything, from groceries and gifts to farm supplies and vet products.

“It was nails, cement, gumboots, wheat mash and home brew supplies – they were the big sellers.”

In the latter half of the 20th century the store was run by Alan and Ann Stead (1977 to 1994) and traded as Te Horo General Store. It was during this time the façade was changed from a modest green and white to a distinctive red, after an offer from Coca-Cola to repaint. The new colour scheme provoked much disquiet in the Te Horo community. Reports say neighbours entered the store and offered the Steads money to paint it. However tempers were quelled as the new signwriting appeared.

As time went on the emergence and growth of supermarkets began to impact on the general store and it’s trading. It was time for the couple to move on.

Mike and Kris Collings, of adjoining Timberlea Gardens, were the next owners (still currently co-owners) and the last to run the business as a general store. The old building saw several changes of ownership and had been vacant for a year when present co-owner, Wendy Reid, bought it in 2004.

With a strong background in hospitality Wendy could envision the almost derelict general store as a heritage café, “the ideal spot to create my idea of how a rural café should operate.”

A transformation began, and although the building was extensively renovated, the historic character remained intact, as well as the original wooden floors and counter, “the café retained the ambience and integrity of the former general store.” Wendy named her café for its “famous” exterior colour. 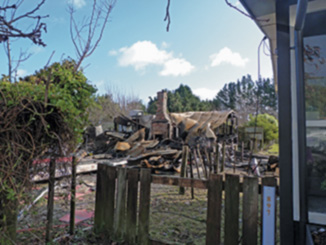 Although fire has ravaged Wendy’s dream and destroyed a favourite destination, particularly amongst the Te Horo community, many traditions from The Red House Café remain. They are transferred to Wendy’s Otaki café, Reds, which is currently open for dinners three nights a week. The sought-after   Sunday Roasts and the popular pork belly dish will be included on the menu.

The future of the Red House Café site is uncertain but her memory is sure to remain.