A unique piece of public art has appeared on the cherry tree at RiverStone Cafe.

The tree has been “yarn-bombed” with multi-coloured knitting designed to fit each branch of the tree. Even the cafe’s name has been knitted into one branch.

Cafe owner Jeanine Cornelius says she was discussing yarn bombing with local knitter Debbi Carson, who wanted to create some exciting new artworks in the town.

“Debbi was thinking about where she could start with the first project, so I suggested the tree,” Jeanine says. “Over the next month or so, she measured the tree branches and started knitting. Suddenly we had branches that were covered in bright colours.

“It’s been amazing to see the reaction and hear the comments of people coming in or just passing by. Being on the main highway next to the shops we’re getting people who stop and take photos, including a lot of tourists. I hope we see more of it around Otaki.”

It’s likely only one other yarn-bombed piece of art has been done in New Zealand – at Rotorua. However, yarn bombing is big overseas, where trees, bikes, fences and even bridges have been decorated.

Debbi created the designs and did all the knitting for the RiverStone tree herself. Some of the designs were based on those she used in a hand-knit business she operated in the late 1980s. Meantime, she has established a group of knitters to help with more yarn bombing projects, and is hoping one of the projects will be completed in time for the Christmas on Main Street event in Memorial Park on 28 November 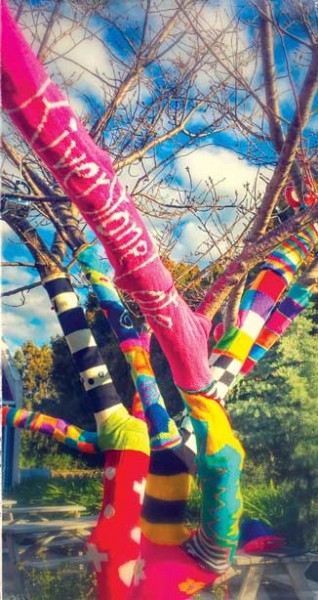