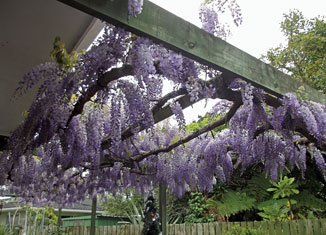 Wisteria is indeed a plant of bold proportions – you cannot plant and leave them. Pruning is an important aspect of the plant’s culture (it can determine the number of flowers produced). If you are unable to prune at least once a year it may be wiser to take the whole plant out. Stems can reach great distances (if planted against a house they will split spouting if left unchecked).

After establishing a framework, size can be controlled by pinching tip growth, but main structural shaping should be done in early summer, straight after flowering. Take out thin or surplus canes and growths, starting from the base of the plant. Farther up the plant, decide on the shape you want, and shorten all minor growths to two to four spurs (leaf buds). This is the same principle used in pruning an apple tree (you can use prunings to weave supports for other plants in the garden – they are flexible and won’t take root easily).

Keep a lookout for borer holes while pruning – wisteria are vulnerable to the borer larvae. Cut out any bad damage – spraying kitchen oil or fly spray into as many holes as you find will give control also.

Some wisteria is grafted and will produce runners from the base – remove these as they will absorb vigour from your plant. If you are trying to establish a vine it’s best to remove the shoots as they appear. If your plant has reached the size you want, it’s better to let them go, perhaps directing out of sight, and then remove at the end of growing season.

There are two main groups of wisteria – Chinese (sinensis), and the Japanese type (floribunda).

W. sinensis usually flower in their first year. Blooms appear in early spring and are strongly perfumed, such as ‘Amethyst’ which produces light rosy-purple flowers. ‘Blue Sapphire’ is the classic blue wisteria that’s such a feature of the October landscape – flowers are tightly packed on each raceme, or chain, and there is a noticeable perfume.

The venusta, or brachybotrys, variety is a strong-growing Japanese native. Known also as Silky Wisteria, it has unusual, silky-textured foliage and shorter racemes than the sinensis – it can look spectacular as a free-standing shrub. The easy to grow, free-flowering ‘White Silk’ has ivory-white, sweetly perfumed flowers which appear with foliage in very early spring. The compact ‘Caroline’ has pale, silvery-mauve blooms and is possibly the most weather resistant of all wisterias.

‘Honbeni,’ or ‘Pink Ice,’ is a true pink wisteria. The lightly perfumed flowers are a soft, rose-pink which deepen as the flower ages, and as the plant matures.

Wisterias are indifferent to soil, but prefer good drainage and ample moisture during the growth or bloom periods. Once plants are established too much water and fertiliser can encourage excessive growth at the expense of flower production.

This beautiful, deciduous vine can be used on pergolas, patio roofs, trellis, balconies, balustrades, walls and fences, under eaves or allowed to scramble up trees – it’s also great for training as a standard.