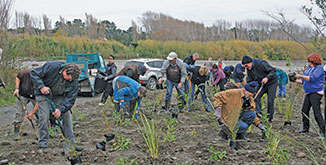 The Friends of the Otaki River FOTOR, held their first open planting day for the season, last Saturday with over 50 people bedding 700 native plants in just half an hour.

This was the first area along the river path from the gate (by Stresscrete) to be planted and the Otaki Flood Protection staff had cleared a 15 metre wide strip along the riverbank and had the holes already dug ready for Saturdays elbow work. FOTOR chairman, Max Lutz said it was quite a long way up to Chrystalls Bend before those walking the track could see much of the planting and work that had been done along the bank over the last 10 or so years. 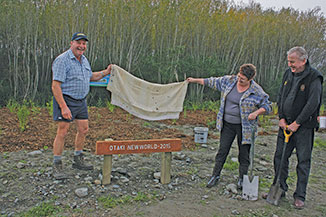 The area was to be known as the Otaki New World block, planted to acknowledge the support business owners, Jackie and Mark Kennedy give to FOTOR and Otaki in general. Over the last 2–3 years New World has been selling the book Otaki River by Rex Kerr, without charging a fee, all the proceeds — $30 per book goes to FOTOR.

“Two hundred books have been sold,” Mr Lutz said. “Every book sold, plants and maintains six more plants for two years. The time it has taken (one and a half hours) to plant the 700 plants and spread the mulch would have taken one person two weeks to complete!”

“Thank you very much. It’s great to help the local community,” Mr Kenny said. “To be able to come up here and see the trees, it’s a beautiful spot.”

Saturday’s planting was in three sections and after the volunteers had finished planting they then manned the wheelbarrows, buckets and spades to spread mulch round the plants and over the whole area planted.

Among those planting were Jackie Kennedy, part owner of New World Otaki, and Pat Kenny deputy manager and several NW staff members, Kapiti deputy mayor Mike Cardiff and two international visitors — Debbie from Queensland and Shona from Ireland, a WWOOFER — a worldwide organisation where people can receive free accommodation on organic farms in return for working on the farm.

The oldest planter was in his mid-eighties the youngest in their 20’s.