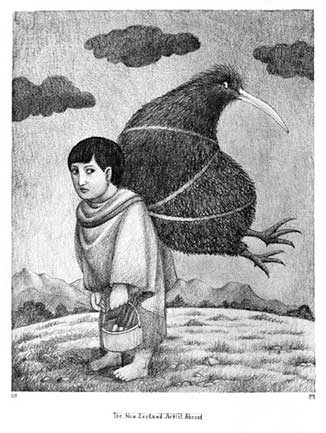 Mahara Gallery is currently hosting the national touring exhibition ‘The Imaginative Life and Times of Graham Percy,’ curated and developed by leading New Zealand art critic, curator, painter and poet, Gregory O’Brien ONZM. Galley Director, Janet Bayly has used the title of a major publication accompanying the exhibition ‘A Micronaut in the Wide World: The Imaginative Life and Times of Graham Percy’ (Auckland University Press, 2011), written by O’Brien as the vehicle for the exhibition, which showcases the charmingly anarchic illustrations of a greatly-respected but little-known artist.

“Mahara is thrilled to be the exhibition’s 21st gallery venue,” said Ms Bayly. “While Graham Percy’s works are held in the National Galleries in Scotland, they have never been exhibited publicly before in New Zealand.”

Though based in London for much of his adult life Graham Percy was born in Stratford, Taranaki (1938), and studied at Elam School of Fine Arts in Auckland. After graduating in the early 1960s, he worked as an illustrator, “a pivotal figure” for the New Zealand School Journal, and collaborated with other Auckland-based writers and artists, including Colin McCahon, Greer Twiss, Don Binney and Hamish Keith. He left New Zealand in the mid-1960s and became a hugely respected artist/illustrator/typographer overseas before his untimely death in 2008. He also produced a remarkable body of his own independent art, including original artwork in children’s books: The Fantastic Flying Adventure by Gerald Durrell, Aesop’s Fables, the Sam the Pig series by Alison Uttley and Jeremy Lloyd’s The Woodland Gospels.

The focus of Mahara’s exhibition is 62 large and medium scale drawings, including artwork from his children’s publications, and also a suite of anthropomorphic kiwi travelling around the world and through time, “a marvellously inventive, anarchic exploration of the national psyche.” Much of Percy’s artwork has a New Zealand feel (the kiwi was a common character in his work) and gives a unique perspective on the expatriate condition.

“They can be funny, touching, insightful, occasionally alarming, but always utterly engaging.”

Like the work of all great illustrators Percy’s drawings communicate on many levels — they engage intellectually as well as emotionally, playful and profound at the same time. He was also a virtuoso in the art of drawing, and the exhibition is a triumph to the exquisite beauty of the hand-drawn line, the deftly applied ink pen and the lead pencil. Coupled with Percy’s great technical skills are the equally great gifts of a boundless imagination, quirky wit and wide knowledge of art, music, theatre, social history, psychology and literature, all of which inspired his work.

The exhibition runs until 7 June 2015. For further information contact Janet Bayly. 6242 or director@maharagallery.org.nz