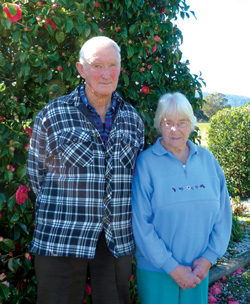 Ray and Beverley (Bev) Marshall were married in Otaki’s Post Office sixty years ago. It was the 15th July, 1954, and getting married was a costly event.

“It cost four pound and ten shillings,” says Ray. “That was a significant amount back in those days.” Laughing, he adds “Our wedding breakfast was a couple of pies washed down with a few beers.”

The couple share many memories, “we’ve had some pretty good times,” and an enduring interest in deer and pig hunting, although less actively these days.

“We were both really keen on hunting – and pretty fit in those days,” says Bev, who was awarded an ‘Ugliest Deer Head’ title for her hunting skills in 1998. The plague is proudly displayed inside the Hautere Cross Road house she has shared with Ray for more than 50 years.

Bev was born in Otaki in 1935, “I’ve lived here all my life,” but Ray began life further south, in Tawa Flats, in 1932. He and his family later moved to Johnsonville.

But it’s the years Ray spent working with Terry Mansell on his Otaki-based dairy farm that the couple remember most fondly. It was during this period the couple’s two children were born, Helen and Earle.

Ray recalls, “I worked on the farm for around eight years – there were about 100 cows.” Both agree “these were good years.”

Later they both worked at a local poultry farm, “for around 23 years we worked at Salisbury’s chicken farm.”

Ray and Bev remember when Hautere Cross Road had 10 small farms, and the road was merely a strip of loose metal, “there was just a bit of seal outside Te Horo School.”

Those were the times they’d catch the bus up town, Friday or Saturday night, to see a movie at Otaki’s picture theatre, and “there was dancing at Te Horo Hall.”

When youngsters, Bev was 19, Ray was 22, wed in 1954 it was rumoured, “It won’t last more than 3 months,” but 60 years on they’ve received 21 cards “and one email” celebrating their diamond anniversary. Cards include messages from Queen Elizabeth, Prime Minister, John Key, the Hon. Sir Jerry Mateparae, (which includes a poem ‘Northwestering’ by Eastbourne poet, Emmanuel E. Garcia), and Hon. Peter Dunne, Minister of Internal Affairs.

“There were around 50 of us, just lovely, and Barry (Mansell) presented me with a bunch of daffodils – they were picked from 100 year old bulbs growing on the farm where we’d lived, where Ray had worked. It was so thoughtful – I was thrilled.”

Once Ray and Bev used to know pretty much everyone around Otaki – nowadays when they walk up Main Street many old faces are gone.

“They’ve either passed on or gone into one of those two-storied rest homes further south.”