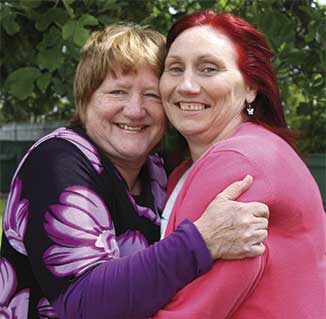 Kapiti Horowhenua Bereaved Parents Support group was formed by two Mums who both lost a child.

“Unless you’ve been there, you really don’t get it,’’ bereaved mother Lisa Gallagher said. “It doesn’t matter if you’re child is stillborn or died as an adult, whatever the circumstance, the grieving never goes away.”

Lisa and Rose Rickett formed the group wanting to turn their negative situations into positives which could help others in the same situation.

“When I lost my son I wanted to talk to someone who understood how I felt but the Privacy Act doesn’t allow details to be passed on,” Rose said.

“I felt really isolated, like I was the only person in the world going through this.”

Meeting on the second Monday of each month, except January, parents from throughout Kapiti and Horowhenua come to share a cuppa and take solace knowing they are not alone. Sometimes guest speakers visit the group. “We’re there through our common grief but it’s not a sombre gathering,”

Lisa said describing it as a ‘get together’ rather than any formal type of meeting.

“Some people might not be ready to come, feel it was too long ago, or not want to disclose their personal circumstance.

There’s no pressure, you do only what is comfortable for you. Please feel welcome to come when the time is right for you.”

The Kapiti Horowhenua Bereaved Parents group get together on the second Monday of each month, except January. A pot luck dinner is planned for

Electra owns and operates the electricity network throughout Kapiti and Horowhenua. Our owner is the Electra Trust.

Electra’s Trust ownership ensures that we deliver an annual electricity sales discount to all consumers connected to our network.