Kāpiti engineer David Rumsey broke from a family holiday in Croatia for a 1300 kilometre return journey to a German village known world-wide for its visionary energy developments.

“It was well worth it,” he told the August meeting of Transition Town Ōtaki (TTO) members. It led him to streamline processes at his work-place, Fonterra’s Paraparaumu cheese factory and see potential for similar developments in Kāpiti and beyond.

Ōtaki particularly is well-placed for an energy-efficient future, already up and running with its Clean Technology Centre and Energize Ōtaki group.

The energy revolution in Wildpoldsried village, population 2600, started in 1997 with the election of a new council with an engineer as mayor and other technically competent councillors. They came up with an ambitious wish list and strategy for the future.

The strategy included energy independence; maximizing the use of wood from local forests; managing water supply and waste water treatment within their boundaries.

Now, undreamt-of success includes micro-hydro, biogas and solar photovoltaic generation providing as much electricity as the village needs, with the output of its wind turbines surplus. The village annually sells $5+ million electricity to the national grid.

From the wish-list, the town has a retirement home, gymnasium, a large building converted to a conference centre and hotel with a theatre above and enlarged and rebuilt schools. All projects have used local wood, sustaining employment and contributing to the local economy.

The town water supply and treatment is local. An early big success was a natural wetland sewage treatment scheme, with sludge trickling through reed beds to the river. No chemicals are used in the wetlands, and the outflow exceeds health requirements. Stormwater goes to an outdoor swimming pool, surrounded by gardens and reed beds. 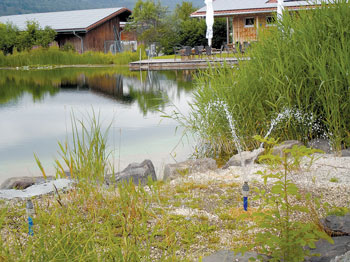 Despite these impressive successes, “the really clever bits are hidden”, David Rumsey told the TTO group. “This is the thinking needed if we are to continue down our path of high energy demand.”

An example is the town’s central heating system which pipes hot water to houses for under-floor heating and radiators, at about 2/3 the cost of people buying oil for their own boilers.

The town offers education in energy efficiency to all age-groups. Eco-tourism has become an industry, with over 100 groups a year visiting to learn about the town’s energy schemes. Mayors and engineers from other areas and countries visit, as do celebrities such as Tom Cruise and Al Gore.

The Council continues to adopt and explore new initiatives, from a thermal-imaging camera to detect heat leaks in houses, changing all street lamps to LEDs, testing electric cars for vehicle manufacturers and offering the village as a test-bed for “smart grid” technology, enabling power companies to balance supply with demand.

Could it happen here? Wildpoldsreid council has more control over land and building than could be dreamt of in New Zealand and operates a system where profits from new schemes stay within the village. This means very little opposition. Wind turbines, seen as an eye-sore by many New Zealanders, are welcomed as another chance to invest in a good scheme.

Locally we have many of the resources that have enabled Wildpoldsreid’s energy achievements—technical expertise, potential for small hydro systems and wind turbines, abundant solar energy, sources of wood, green waste and animal effluent.

Lacking is the vision and drive at national and local body government levels, said David Rumsey. “As consumers we need to make our voices heard—and vote in a few engineers and science teachers!”