It was another “battle of the giants” as the “old foes” Waitohu 1 and Otaki 3 teams took to the field for the final of the annual Interschool Rippa Rugby tournament, last week, with Otaki the victors and holders of the Otaki Sports Rippa Rugby Tournament Shield winning by 11-8 points.

The year five and six grade had the biggest number of teams playing through the pool games towards the semi-final. But with time constraints, it was 2pm before the semi final, it was decided to take the two top teams straight to the final.

The other two grades had completed their finals earlier with the Otaki year seven and eight team taking the top position over Te Kura Kaupapa Maori O Te Rito at 6-5 and the Otaki year three and four team trumping Manakau 5-2.

“This has been the biggest rippa rugby tournament we’ve had,” Horowhenua-Kapiti Rugby Union’s Ryan Shelford said. “I think rugby is starting to grow again.”

He thanked the parents, supporters, the referees – senior students from Otaki and Paraparaumu colleges and all the players, for a great day’s sport.

“There’s been some awesome rippa rugby today,” he said.

This tournament was the biggest Otaki rippa rugby tournament with 29 teams involving 320 children playing for the section honours. Playing in pools, from year three and four, through five and six and to the oldest pupils in years seven and eight, each age range competed in their individual pools to star in the play-offs. 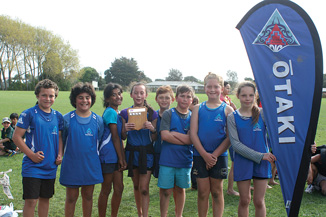