Roy Williams met his Scottish wife-to-be Helen when he came to New Zealand on holiday in the ‘fifties. On leaving school in Folkestone, on the coast of Kent, he joined the firm of W Hinds. They were major clocksmiths, with 24 shops throughout England. Roy started learning the business of clock repair as a ‘learner-improver’. By the time he left four years later he had worked his way up through the ranks, gaining wide experience of both clocks and watches.
Roy joined the Royal Air Force at 18, seduced by the promise of foreign travel. He was sent to Australia, and found himself on Christmas Island watching H-bomb tests while servicing Canberra bombers.

Things were pretty cavalier in those days – a pair of shorts and dark glasses were the standard issue, without any thought of personal safety. What of his colleagues? He says that the rest of his squadron are all deceased, although the authorities never acknowledged the risks. After H-bombs, Roy found himself at the Woomera rocket range trying to put satellites into orbit. Unsuccessfully, he adds!
After four years in Australia, he was ‘demobbed’, and returned to England.
He returned to Australia, and while on holiday in New Zealand met Helen in Auckland. They married in Napier, then moved to Lower Hutt, where Roy found work as an engraver. Clocks and watches attracted him back to horology, but they yearned for ‘home’ and returned to Britain, where they would spend 12 years and have their family of two daughters and a son.

Unable to settle in Britain, they returned to Lower Hutt where for 25 years Roy had his own business repairing clocks and watches. He reckons he employed and trained most of the lower North Island’s clock and watchmakers in his time. With both his daughters living in Otaki, breeding Arabian sport horses, Helen & Roy moved to Waitohu Valley Road, with Roy commuting to Lower Hutt. They have lived in Otaki, on and off for 10 years and now live on the Plateau.
In 2014 Roy took a lease on the shop on the highway vacated by Minx Shoes and set up repairing clocks. Watches occupy a lesser part of the business, as mostly they’re digital, and the old ‘wind up’ mechanical watches are now too tedious for a man in his late seventies. Over the years Roy has accumulated ‘cabinets full’ of parts, and he fears that his knowledge will die with him.

With Helen running the front of shop, and Roy ‘out the back’, the shop has a fascinating collection of clocks, and if you’re there on the hour, you won’t be able to hear above the sounds of chiming clocks. There are grandfather clocks, grandmother clocks, mantel clocks, wall clocks: the variety is huge.
I asked Roy about the oldest clock he’d ever worked on. It was a big grandfather clock, a ‘lantern’ clock dating back to 1650. A customer bought it in for repair, and eventually sold it to Roy. He later sold it for $9,000 but reckons that it was worth $25,000 but there are few buyers in NZ prepared to pay this much.
Much of Roy’s business comes from Lower Hutt, but he always seems to have enough to keep him busy. If you have a cherished timepiece that needs an overhaul, you’d better go and see Roy. 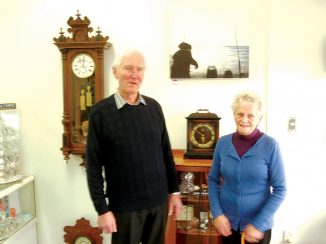