It’s a brand new $25,000 IRB for the Otaki Surf Lifesaving Club after it won the BP Click for your Club competition.

Thanks to the great wider Otaki community — schools, community groups, retailers and businesses and members, the Otaki club finished the competition with 12,982 online votes, well ahead of the other North Island finalists from Gisborne and Coromandel.  The competition ran for over three weeks with the grand prize of the inflatable rescue boat plus trailer and motor. BP launched the competition giving away two Inflatable Rescue Boats (IRBs) for the second year running in recognition of the important role the rescue boats play in helping to save hundreds of lives across the country every year.

Last year alone, lifeguards across the country saved 1,027 lives — with about 60% of these involving an IRB.

BP Corporate Affairs Manager Jonty Mills said the efforts made by the clubs and the support from their communities was impressive. “We’ve been incredibly impressed by the strength of passion shown by the clubs throughout the competition. They’ve been out there drumming up support, reminding their communities about the essential role Surf Lifeguards play in keeping them safe. The support they’ve received is testament to how much these boats matter to their communities.” he says.

BP offered clubs around the country the chance to win a brand new IRB, with one being won in the North Island and one in the South. Six finalists were selected (three from each island) to compete to drum up community support, encouraging supporters to go online daily, to watch a video about their club, and to vote for them.

The Otaki Mail caught up with the on-duty lifeguards the following day, when they’d had an opportunity to get the new boat into the sea.

“It’s the first time I’ve driven it — it’s good,” senior life guard Lee Doyle said after some of the lifeguards took it for a spin. It handled the reasonably small surf well, but a tight turn saw junior guard, Alex Lundie take a backwards flip into the briny!

The club has a strong contingent of lifeguards in all sections, with the youngest members- nippers, seven to 10 years and juniors 11–13 years, out on a pre-training warm-up run prior to a training session on the beach and in the water. When they are on the water, there is always a ratio if one senior to five juniors in the water at all times. Club members patrol the beach weekends from December through to late March, with professional — paid — guards weekdays during the summer holidays. 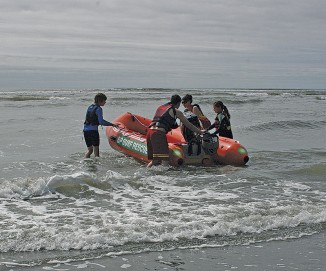 The new boat was officially handed over to the club on Dec 5, when Otaki member of parliament, Nathan Guy and BP’s Jonty Mills were present along with many Otaki lifeguards, and club members.

BP has been associated with surf lifesaving for 45 years: the IRB competition is their way of recognising the valuable contributions clubs make to their community. Six clubs were involved in the final, three from the North Island and three from the South. The Brighton club from Otago won the South Island section of the competition. Together, Otaki and Brighton managed to pull in nearly 30,000 online votes over three weeks of the national competition, calling on community groups, schools, shops and members of their community to show their support by voting for them online.

“These boats are incredibly important, but we also know it’s really difficult for voluntary clubs to raise the funds for a new boat,” Mr Mills said. “That’s why we have been so pleased to be able to offer two clubs the chance to win. For anyone heading to Brighton and Otaki beaches this summer, this boat might just save your life.”

Surf Life Saving New Zealand CEO Paul Dalton said “it’s like Christmas has come early for these two clubs. With IRBs being used in around 60% of rescue, they are well utilised but they’re also a significant investment when they need replacing. These new boats will be of great assistance in their rescue operations this summer and beyond.”

Every summer, around 4,000 volunteer lifeguards across 74 clubs nationwide give over 200,000 hours of their time patrolling our beaches and helping to keep New Zealand beach-goers safe. BP has been partnering with Surf Life Saving New Zealand for over 45 years, working together to build up one of the most advanced rescue fleets in the world.