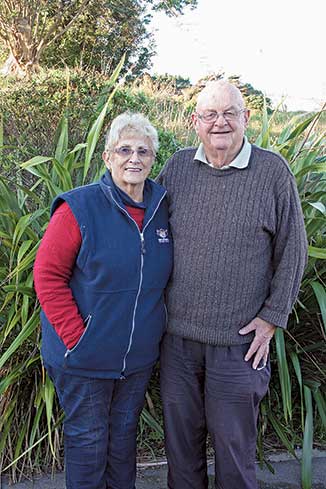 Congratulations to Otaki’s Napier and Lyn McFedries, both recipients of a Queens Service Medal in the recent Queens Birthday Honours. The awards acknowledge over 50 years volunteer work with the surf lifesaving and swimming clubs.

Nape, as he’s known to everyone, was transferred to Otaki Railway branch of the BNZ in 1962, “I was amazed to find the railway was not the only part of Otaki! I loved it here so got out of the BNZ so I wouldn’t have to transfer again.”

In ’63 he started taking the surf squad to the old Levin pool for training and the following year formed the Otaki Swimming Club, using the Otaki College pool for club nights and began a fundraising drive to build the Haruatai pool for Otaki. Over the years they raised the necessary funds to first install lights for night training, and during the 1980s further fundraising purchased and in 1990 installed the steel beams necessary for covering in the pool and heating it.

During all this time he and Lyn were raising their own family, and coaching swimmers and surfers.Lyn joined Nape at the surf club in 1964, spending the weekends at the beach where Lyn was on patrol every weekend. “It was good, the kids were little; they loved the beach” she said.

As well as their teaching and coaching, they have both spent many years working with surf lifesaving at regional and national levels. After Lyn joined the surf club in 1964 she worked at fundraising and in a support role until she took on committee secretary, only retiring from that position in 2010 after 38 years. She was fundraiser for 28 years – helped organise funding for the new clubrooms after fire destroyed the original building in about 1987 and co-organised five club reunions. She was team manager for 15 years – manager-campmother-cook to hundreds of kids over the years, particularly when the teams were away at competitions at regional and national events. Lyn was delegate to the Western Districts committee and competition official for 23 years. She was a member of NZ Surf Lifesaving Association and a surf official at NZ surf championships and carnivals.

Nape joined the surf club in 1963 and has been the swimming coach ever since; he has helped many swimmers gain their surf lifeguard awards and coached top swimmers to reach their competitive goals. Nape was a lifeguard for 40 years, committee member for 39, a competitor for 30 years, instructor for 27 and team manager for 21. Add to that, a Western District representative, examiner, patrol inspector, a competition official for 30 years at Western Districts and Wellington carnivals and regional and national events. He officiated at the NZ-Australian competitions and both Lyn and Nape officiated at the World Masters surf lifesaving competitions. Nape has retired as a competition judge, it was getting too much to on the beach from 7.30am until 6pm “I loved it!” he said.

After they co-founded the Otaki Swimming Club in 1964, Nape was the head coach, club captain and carnival official. Lyn was a committee member, handicapper and learn to swim coach.

“We’ve taught hundreds of children in town to swim – hate to say how many but it’s been great,” Nape said. One estimate puts it at 1,800 children and adults have learned to swim under Nape and Lyn.

“It’s been a fantastic community for support – when the clubrooms burned down and also last year’s Win an IRB vote competition – Otaki finished with over 13,000 votes!” Nape said. “The Otaki Surf Club is a family oriented club – it’s been an honour to be a member of the club. We’ve made lots of friends. We have members helping parents and now have parents doing their surf training – yes they have to swim the 400 metres in under nine minutes, the same as the juniors – it’s just amazing.”

They managed the Manawatu Swimming association representative team to the national championships for five years. Accolades they have both been awarded include: life membership to the Otaki Surf Club and Otaki Swimming Club and Western Districts Surf Association, and both hold 50 years badges for services to NZ Surf Lifesaving. Lyn is a life member of the Central Region and has a Distinguished Service award from the NZ Surf Lifesaving. Nape is a life member of NZ Surf.

“We’ll still go to the nationals, we love it, we’ll probably end up being team managers! “I’ll be able to watch the kids for the first time!” Nape said. He’s still swimming coach for the surf club. “As long as the body keeps going we’ll be there!”

“We were blown away by it (QSM’s). I knew Nape had been put up, but not myself,” Lyn said, Nape made no comment!

“It’s been a great life, made a lot of friends around the country” were their final words.

The Otaki Surf Club congratulates Nape and Lyn on their awards. “Well deserved for fantastic people in our community.”