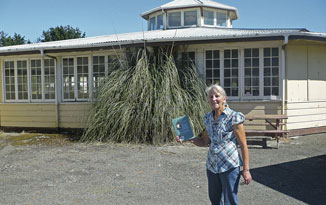 Otaki writer Janet Bottin has launched her latest book this month. Called ‘MOMENTS for which there are no words’ it is an anthology for adult readers. It is a book of stories, both fact and fiction, imaginative and experienced which covers the period from 1944–2014. Janet describes the theme as changing and challenging times. The stories are related to WW2 and cover events like escape, immediate post-war and even a story about children coming to the Otaki Health Camp. The final story is a lovely letter to Betty Perkins, long time resident of Paekakariki.

Janet has had a long history of writing and broadcasting, with over 50 children’s stories broadcast on National Radio; 12 stories featured on TV, and 90+ children’s books, from pre-school to teenage published both nationally and internationally. Her first book, called The ‘Big Block of Chocolate’ was a picturebook for children and published in 1985. This was followed the next year by her first junior novel ‘Call of the Kotuku’

Several of her popular books for junior readers have been adapted for radio, and her stories have appeared on children’s television programmes. In 1990 her second junior fiction book, Pins and Needles (1989), was Hodder and Stoughton’s bestselling title in any category. The Big Block of Chocolate was awarded a Premier New Zealand Bestseller Gold Award in 2004.

The book is available at PaperPlus in Paraparaumu and Levin and at Kirkwood in Manakau.