Competitors ran in their year groups for both boys and girls, except for the years seven and eight where they combined the year levels.

The top 10 to finish in each race qualified to run at the Kapiti interschool cross country championships the following week. The annual event is run by Peter Ellis from the Kapiti Running and Harrier Club. Students compete from Otaki, Waitohu, Te Horo and Manakau schools and Otaki College. 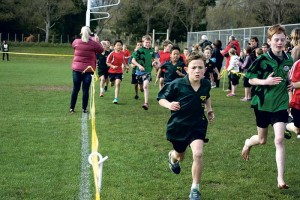