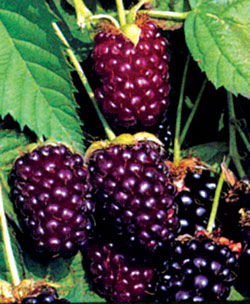 This hybrid berry (also known as brambles) is a cross between a raspberry and a blackberry, and is an easy crop to grow, requiring only a little support and a sunny position to produce an abundance of fruit.

It typically grows in forest clearings and fields, particularly where fire or wood-cutting has resulted in clear, open spaces.

The raspberry-like flower is a major nectar source for honeybees, although cold weather at flowering results in poor pollination, and therefore small fruit.

The sweetness and flavour of boysenberries is hard to beat – they’re great in a fresh summer salad, or added to a plate of ice-cream and cream! They also have an added health bonus – the fruit is high in antioxidants, and rich in vitamin C.

Plant berries approximately 1 to 1.5 metres apart, in a sun-filled location where they can climb up a trellis or some sort of support system – alternatively you can train them like a pillar-rose.

They prefer slightly acidic, free-draining soils, rich in organic matter. Mulch well to ensure root systems remain moist during the growing season, and water well during warm weather, and while fruit is setting and developing.

An application of general fertiliser during spring is a good idea, but too much nitrogen will encourage leaf production instead of flowers.

The frost-tolerant vines need protection from strong winds – spring gales can snap new growth where it emerges from the canes, and they do better grown away from salty, marine conditions.

Prune in mid-winter by removing old canes that have fruited, and make sure you remove all dead, damaged or weak-looking branches. Cut canes to the base, and any real thorny ones should be cut off as low to the ground as