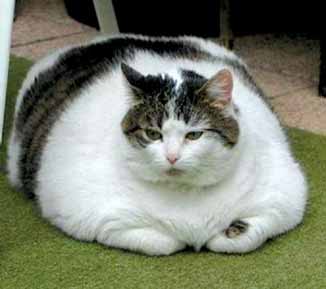 Is your cat fat? Well it’s quite likely. According to a recent survey about one third of New Zealand’s cats are over weight.

Having just heard on the news that 66% of NZ adult humans are overweight, finding out that our feline friends are following suit is worrying.

The survey of more than 300 cat-owning Kiwis by pet food company Royal Canin found 58 per cent of cat owners did not measure the portions they fed and only 23 per cent made sure their cats had daily exercise.

The average cat should weight 4-5kg. The fattest cat in the world is called Katy, lives in Russia and tops the scales at 23kg!. But this is extreme. Obesity is defined as being more than 15% overweight which is around 800g of extra weight for the average cat

Many cat owners feed an ad lib diet. That means that the meal portions are a not measured and food is left out all the time for the cats to snack on. Feeding a measured amount of food, as recommended on the packet and using a weight reducing diet are recommended to prevent weight gain.

Trying to increase cats’ activity is less easy. They are renown for sleeping 18hours a day or more, with a well-worn track to the feed bowl evidence of their only exercise. Interacting or playing with them, or taking them for walks on a daily basis is a way of increasing activity.

However, just like people, every cat is different and has a different optimal weight so body condition needs to be assessed to determine whether they are actually overweight or just big boned.