Dahlias deserve a place in your perennial border, although they also rate a definite place of their own. Grown in a bed by themselves, carefully staked, fed, watered and disbudded with care, they will produce flowers of perfection.

Today’s dahlias offer a vast range of forms and colours (the only colour you can’t have is blue!). Choose from several thousand named varieties, ranging in size from the pint-sized dwarfs up to giant-flowered, 1.8metre tall exhibition types. Some produce dense masses of dark green foliage, while others have an abundance of almost black leaves.

Success with dahlias starts with the soil. Free-draining soil, and full sun, is vital for healthy growth and abundant flowering. Before planting, prepare soil by digging it over, and work in some well-rotted compost. Heavy soils can be mounded to improve drainage.

It’s easy to get impatient when spring arrives, but don’t plant your tubers immediately after the last frost. Dahlias planted too early mature in hot weather and produce poor flowers.

The plants are heavy feeders and their roots need plenty of room to spread. The large varieties need at least 90cm between plants, smaller types used for massed effect can be placed 30cm to 60cm apart.

After planting, apply a dressing of general purpose fertiliser. A small handful sprinkled around each plant and lightly worked into soil is usually sufficient. Don’t use high-nitrogen plant foods as stems will become soft, and your plant will grow leaves at the expense of flowers.

Slugs and snails love the new shoots – use bait, such as animal-friendly Quash, at the first sign of growth. During the growing season they may also require occasional applications of insecticide/fungicide – powdery mildew and mites are often a problem late in the season.

Keep dahlias well watered during dry periods – a thorough watering weekly is preferable to a daily light sprinkling, and give tall plants some type of support. A simple method is to insert three bamboo canes around each plant, and encircle these with twine as plants start to grow.

To produce top-quality blooms for picking or exhibition it’s helpful to disbud plants (remove the two smaller flower buds either side of the main bud). Disbud only large types however – pompoms and other small dahlias should have masses of flowers.

Regular removal of spent blooms is the key to prolonged flowering – dahlias, when properly cared for, can flower continuously for six months.

After the first frost has killed the tops of your plants, cut off stalks and loosen the soil around the root clump. Raise the roots carefully so as not to break any tubers from the stem, and turn upside in the sun for a few hours to let any juice drain from the hollow stalks. Cover with dry sand, peat-moss or sawdust and store in a cool, dry spot until spring. 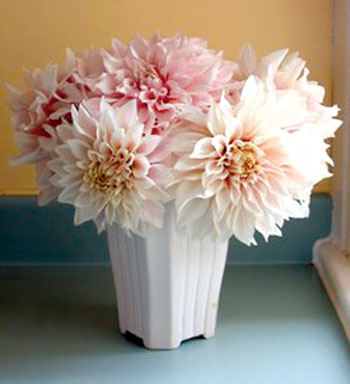