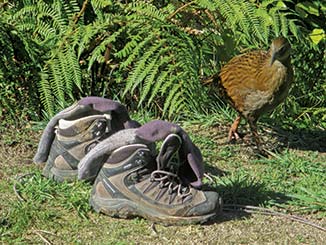 I’ve just taken off a few days to walk the Heaphy track, one of New Zealand’s 8 great walks. I really enjoyed sharing my time with the native fauna. We were serenaded by kiwi at night, the great spotted kiwi, although we didn’t see any. One group of trampers triumphantly announced that they’d seen kiwi around the hut one evening, but on further enquiry it turned out to be the lesser spotted, short beaked variety — otherwise known as the Weka. The ubiquitous weka kept us company wherever we went. Trampers that stop and down packs inevitably bring out muesli bars and scroggin, firm favourites for the weka. One German camper was delighted to have the weka in such close proximity, until the next morning, when he discovered his pots and pans missing, and his cutlery, socks and a bar of 80% dark chocolate. All were subsequently recovered from a stash well hidden in the tussock but from then on our camper friend would be heard muttering in German whenever the weka appeared.

Slightly slower than the quick witted weka were the endangered giant land snails. Powelliphanta are nocturnal, voracious carnivores, about 9cm diameter and weigh the same as a female tui. For a tired camper a thing of nightmares and another reason to keep the tent well zipped at night and not to expose any toes.

And of course we couldn’t miss the Heaphy sand flies at the end of the track. However much insect repellent you use you can’t help but join in the Heaphy sand fly dance. A bit like a thigh slapping Austrian lederhosen dance, except the dancer is compelled to slap any part of the body, legs, arms, neck, head, and no music is required.