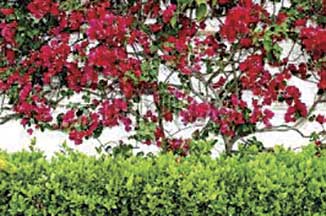 Bougainvilleas, with their dazzling display of vivid summer colour, are possibly the showiest and most popular tropical vine in cultivation. The actual flowers are tiny and insignificant — it is the brilliant bracts surrounding the flower which provide the flamboyant spectacle.
The vines originate from South America, and are named, together with a South Pacific island, after Louis Antoine de Bougainville, a noted 18th century sailor and explorer.

These dry climate plants will survive in most soils and don’t need a lot of feeding. When given fertilisers they usually make a lot of growth and either flower poorly or not at all. The best displays are often derived from plants which are kept dry and starved – they are well suited to growing in containers and will in fact flower more profusely if confined, than if over-fed and over-watered.
Being major heat lovers they prefer a sunny position, and look great on a warm, sun-filled wall where there is little colour competition. Warm soil temperature is almost as important as high air temperature so good drainage is a basic essential. Although requiring adequate summer moisture, they will tolerate considerable dryness once established.

A strong growing plant that needs a sturdy support, bougainvillea responds well to pruning — prune hard and remove twiggy growth after flowering as the vine flowers on new wood. Although evergreen they may lose leaves in a cold winter, the vine may even look dead, but then shoot away from the stems or the base as soon as the weather warms up.

The hardiest, most cold tolerant bougainvillea is “Magnifica Traillii”, which has a magenta- purple blossom. It is the biggest, strongest grower, and can develop into a dense wall of purple, so needs a large area to spread — it also makes an excellent ground cover.

“Scarlet O’Hara” is one of the hardier and probably best-known bougainvilleas. It produces large, pendulous sprays of a deep scarlet, but its colour can vary slightly according to growing conditions – the harsher the conditions the deeper the colour.

A vigorous grower and spectacular climber, ‘Killie Campbell,” has reddish-brown bracts that change through to orange-scarlet and magenta-purple as they open. With all these colours appearing on one flowering stem simultaneously, the effect is awesome. It is exceptionally long-flowering, and has a distinctive weeping habit, which makes it great for pots on a sunny deck or in a planter.

Although an immensely tough climber, (it is widely used as a motorway plant in some countries), bougainvilleas are thorny beasts – avoid planting near steps, play areas or outdoor dining areas.