Saturday April 25, in the hour before dawn, they came in their hundreds, lining Main Street and Memorial Park, in places three and four deep, for the special commemoration of the 100th year since New Zealand troops landed at Gallipoli.

No actual head count could be made, some said it was the biggest crowd they had ever seen at a Dawn Parade, but general opinion was 1000 plus with some others saying 2000-3000. Individuals, families, young and old, had all turned out for the occasion.

The Ratana Brass Band led the parade of ex-servicemen men and women, with the six remaining World War II veterans heading the parade on their march from the Memorial Hall down to the Memorial Park beside the Civic Theatre. They were followed by veterans of many other battles since, with civilians bringing up the rear.

RSA president, Pat Kenny began the service with the reading of a poem written by a Neil Turnbull when he was aged 22, after he had visited the graves of his grandfather and uncle. Mayor Ross Church spoke of the 100,000 New Zealanders, who served overseas, with 18,000 dying or killed in action and 40,000 injured. “But I commend those who were at home, supporting their communities; especially the women, stepping up, serving at home and overseas, taking on the work of the menfolk.” He spoke of the nursing service, both overseas and the care for the wounded as they arrived back in New Zealand and the total dedication of the Red Cross nurses.

Soldiers from 2 Signal Squadron at Linton Camp provided the guards on each corner of the cenotaph and the rifle squad, who fired a three round volley as the service came towards its end with daylight breaking.

For many it was home while others went to the RSA clubrooms for breakfast and a drink.

But that wasn’t the end of the day.

The Otaki Heritage Bank Museum opened its doors at 6.45am for people to view the third part of its exhibition of the Anzac Centennial. By 1pm they had had 320 people through their doors! The greatest number of visitors in one day ever and they still had another hour to go!

But the day didn’t finish there. Pat Kenny and others from the RSA went to the Dawn Service at Manakau at 8am and then down to Waikanae later in the morning. The Otaki District is from Manakau to Waikanae. 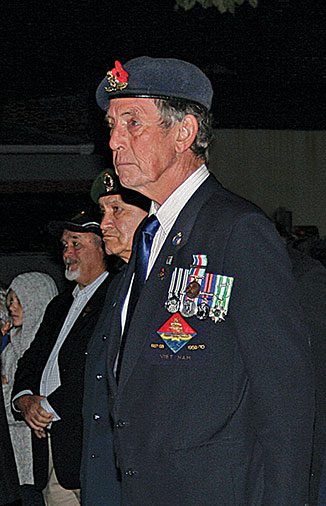 At 5pm 100 or so people gathered at the Otaki Cemetery for the Retreat. Cadets from 49 Squadron Kapiti and the Sea Scouts from T S Taupo provided the flag party during the evening service. Reverend Tim Morris blessed the 100 white crosses, one for each of the soldiers who died in action over the four years of World War I, acknowledging that many had no graves. Mr Morris read the prayers for Reveille and the Last Post was played, so ending the formalities of a day to commemorate those who served and died during World War I and those who later died from their injuries.