Otaki’s Clean Technology Centre provides a focal point for a number of emerging clean technology companies. One of the most promising is Andrew’s company Sunrayker.

Harvesting energy from the sun is a ‘hot’ topic right now. We have seen solar collectors on the roof of houses heating water for decades. Photovoltaic panels are making an impact: we see them on the roof of the Memorial Hall, powering much of the library. Advances in the technology have done away with the need for big batteries to store the sun’s electrical energy, and many new houses are incorporating PV panels to reduce the size of their electricity bills.

Andrew Clark has been involved with solar power for four years. His credentials are impressive, starting with a Massey degree in Manufacturing and Industrial Technology, followed by 20 years in various engineering, energy and research organisations.
PV has been with us for 30 years, but it’s only in the last two years that production methods have allowed massive cost reductions, so electricity generation from the sun via photovoltaic panels has become cost-effective.

The writer has ordered 12 photovoltaic panels for his new house, which will generate 3.12 kilowatts in full sun, returning 78 cents per sunshine hour, which will reduce his power bill significantly, allowing him to sell surplus back to the national grid.
Sunrayker’s innovative approach is to marry two solar technologies, to generate electricity by PV and hot water by a rather ingenious method, both via parabolic mirrors tracking the sun, to ensure maximum thermal gain. Andrew has a target market of dairy farmers, who need both electricity and hot water in their milking sheds. The big breakthrough is in cost: whereas conventional roof-mounted PV systems are estimated to cost $0.09 per kilowatt-hour, Sunrayker’s system will only cost $0.05 per kilowatt-hour, at a capital cost of $2,250 per kilowatt, against ‘conventional’ PV’s cost of $2,750.
How does he do it ?

The land-mounted technology is modular. Each module generates 500 watts of electricity and collects 1,500 watts of the sun’s heat, from a collection area of 2.5 square metres. In the example pictured, there are 6 modules which will generate 3 kW of electrical power and 9 kW of thermal power during peak sunshine periods. The collector array is intelligent, and moves the parabolic reflectors to follow the sun, ensuring maximum solar gain.

Andrew Clark can be contacted at andrew.clark@sunrayker.com or phone 027 604 1312 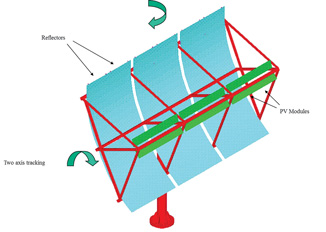